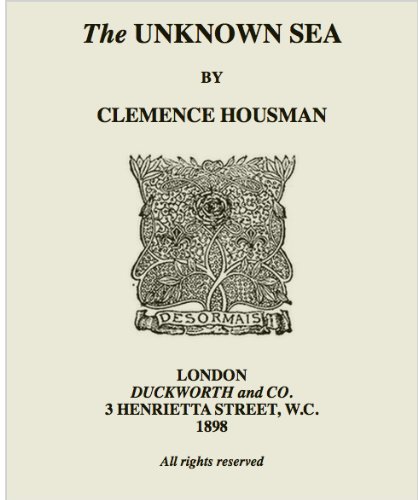 The Unknown Sea
by Clemence Housman

Description:
An uncertain path promised fairly till half way, where a recent lapse turned him aside on to untried slopes and ledges: a perilous ascent to any not bold and sure and practised. The spice of danger kindled the boy's blood; he won to the top with some loss of breath, but his head was high, and his heart was high, and ultimate failure envisaged him no longer. He stood among graves.

Northern Diamonds
by Frank Lillie Pollock - The Riverside Press Cambridge
They awoke from uneasy slumbers to find the train rushing through a desolate landscape of snowy spruces. Through the frosted double glass of the windows the morning looked clear and cold, and glimpses of rivers and lakes showed clear, shining ice.
(5884 views)

Into the Unknown
by Lawrence Fletcher - Project Gutenberg
The scene is magnificently striking, but grand with a loneliness awful beyond description, for, so far as the eye can reach, the fervid sun beats upon nothing but towering mountain-peaks, whose grey and rugged summits pierce the fleecy heat-clouds.
(5847 views)

A Tale of Two Tunnels
by William Clark Russell - Chatto & Windus
The ship Lovelace lay in the East India Docks, being newly arrived from an East India voyage. Her commander, Jackman, stood in her cabin and gazed in his glass; he looked at his face, and seemed to study it. There was a mark as of a blow...
(4340 views)

Robbery Under Arms
by Rolf Boldrewood
A story of life and adventure in the bush and in the goldfields of Australia. The book deals with the classic idea of an honest man driven to crime and the suffering it brings him. It is also full of the adventure and excitement that comes along.
(5663 views)