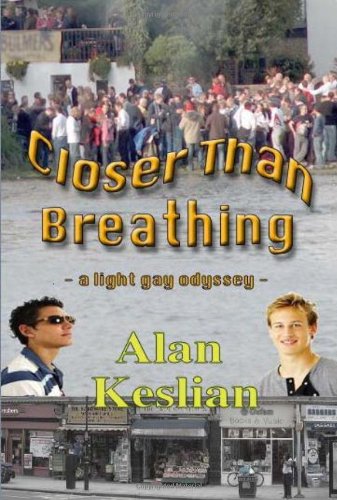 Closer Than Breathing
by Alan Keslian

Description:
A full length novel which tells the story of Ben, a young gay man new to the metropolis, who is confronted by a series of odd, eccentric people, including drug dealers, goths, psychics, a veteran author, Loyd Larcher and ageing rock musicians Rick Shwagger and Heath Prityards.

LA 3-Way
by Ben Borland - Smashwords
A comedy crime caper about the intertwining lives of a British pop star in Hollywood and an ordinary young man in Scotland who looks just like him. The pop star's attempt to atone for his wife's death leads him into deadly territory...
(4263 views)

The Bog Monster of Booker Creek
by Wayne V. Miller
In an extended letter to his son ten years in the future, John Densch chronicles how he and his family slid into a media circus, one in which a middle-school science project became a national joke. The joke takes an ominous turn.
(6139 views)

Life, Love, and a Polar Bear Tattoo
by Heather Wardell - Feedbooks
When Candice's in-laws were killed eight months ago, she lost more than just two of her favorite people: she lost her husband Ian as well. After only two years of marriage, their guilt and pain have left them living together but apart ...
(5677 views)

Yellow on the Outside, Shame on the Inside: Asian Culture Revealed
by Anson Chi
This didactic novel reveals the truths about Asian culture, which will shock you to the marrow of your bones, and open a hidden world of long-guarded secrets. Anson Chi is an author, politician, model, activist, and retired engineer.
(8822 views)