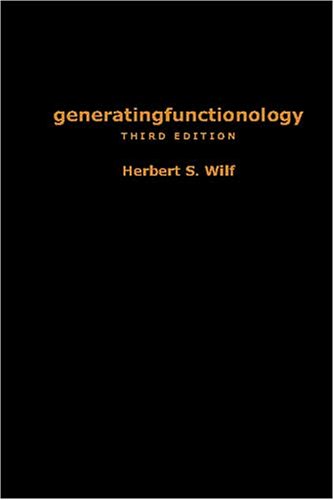 Description:
Generating functions, one of the most important tools in enumerative combinatorics, are a bridge between discrete mathematics and continuous analysis. Generating functions have numerous applications in mathematics, especially in: Combinatorics; Probability Theory; Statistics; Theory of Markov Chains; and Number Theory. One of the most important and relevant recent applications of combinatorics lies in the development of Internet search engines, whose incredible capabilities dazzle even the mathematically trained user.

Introduction To Finite Mathematics
by J. G. Kemeny, J. L. Snell, G. L. Thompson - Prentice-Hall
This book introduces college students to the elementary theory of logic, sets, probability theory, and linear algebra and treats a number of applications either from everyday situations or from applications to the biological and social sciences.
(14311 views)

Languages and Machines
by C. D. H. Cooper - Macquarie University
This is a text on discrete mathematics. It includes chapters on logic, set theory and strings and languages. There are some chapters on finite-state machines, some chapters on Turing machines and computability, and a couple of chapters on codes.
(19263 views)