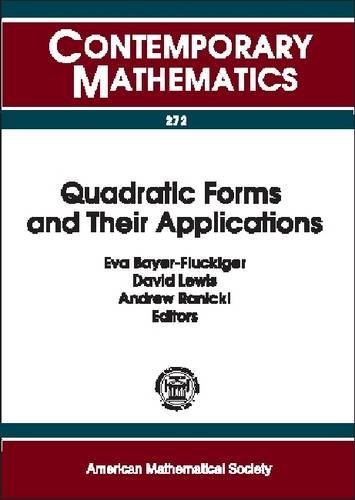 Quadratic Forms and Their Applications
by Andrew Ranicki, et al.

Description:
This volume outlines the proceedings of the conference on "Quadratic Forms and Their Applications" held at University College Dublin. It includes survey articles and research papers ranging from applications in topology and geometry to the algebraic theory of quadratic forms and its history. Various aspects of the use of quadratic forms in algebra, analysis, topology, geometry, and number theory are addressed.

Geometry and Group Theory
by Christopher Pope - Texas A&M University
Lecture notes on Geometry and Group Theory. In this course, we develop the basic notions of Manifolds and Geometry, with applications in physics, and also we develop the basic notions of the theory of Lie Groups, and their applications in physics.
(16917 views)

The Fourth Dimension
by Charles Howard Hinton - S. Sonnenschein & Co.
C. H. Hinton discusses the subject of the higher dimensionality of space, his aim being to avoid mathematical subtleties and technicalities, and thus enable his argument to be followed by readers who are not sufficiently conversant with mathematics.
(3823 views)