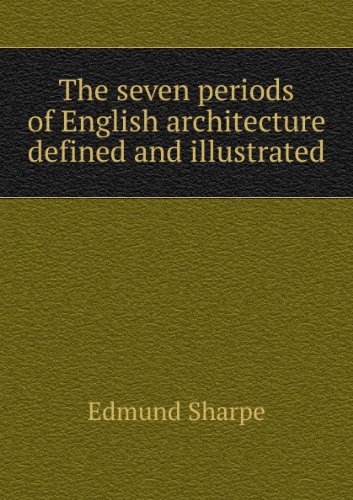 The Seven Periods of English Architecture
by Edmund Sharpe

Description:
The object of the present treatise is to present at a single glance a comprehensive view of the History of English Church Architecture from the Heptarchy to the Reformation, and to do this in a manner, which, without taxing too seriously the memory of the student, may enable him to fix in his mind the limits, and the general outline of the inquiry he is about to enter upon.

Romantic Castles and Palaces: As Seen and Described by Famous Writers
by Esther Singleton - Dodd, Mead & Company
A collection of essays on forty-eight spectacular castles and palaces from around the world. The authors are Sir Walter Scott, Alexandre Dumas, Robert Louis Stevenson, etc. The pictures were taken before the book was published in 1901.
(11422 views)

Vanishing England
by Peter Hampson Ditchfield - Methuen
This book is intended not to raise fears but to record facts. We wish to describe with pen and pencil those features of England which are gradually disappearing and to preserve the memory of them. It may be said that we have begun our quest too late.
(12947 views)

Passages: explorations of the contemporary city
by Graham Livesey - University of Calgary Press
This volume examines eight topics related to the contemporary urban domain. The author employs powerful geographic and literary concepts such as space, narrative, and metaphor to interpret the often bewildering complexity of the post-modern city.
(9663 views)