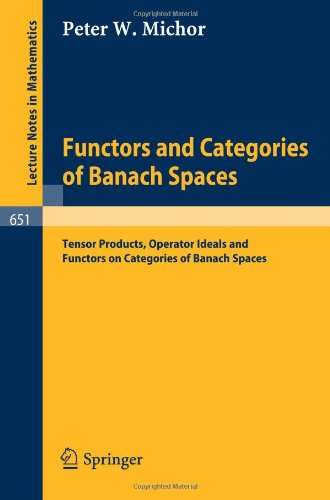 Functors and Categories of Banach Spaces
by Peter W. Michor

Description:
The aim of this book is to develop the theory of Banach operator ideals and metric tensor products along categorical lines: these two classes of mathematical objects are endofunctors on the category Ban of all Banach spaces in a natural way and may easily be characterized among them.

Lectures On Some Fixed Point Theorems Of Functional Analysis
by F.F. Bonsall - Tata Institute Of Fundamental Research
The book is concerned with the application of a variety of methods to both non-linear (fixed point) problems and linear (eigenvalue) problems in infinite dimensional spaces. Author was interested in the construction of eigenvectors and eigenvalues.
(9173 views)

C*-algebras
by John Erdos - King's College, London
These notes form an introductory account of C*-algebras. Some results on more general commutative Banach algebras, whose proofs require little extra effort, are included. There are accounts of two applications of the commutative theory ...
(8871 views)

Banach Modules and Functors on Categories of Banach Spaces
by J. Cigler, V. Losert, P.W. Michor - Marcel Dekker Inc
This book is the final outgrowth of a sequence of seminars about functors on categories of Banach spaces (held 1971 - 1975) and several doctoral dissertations. It has been written for readers with a general background in functional analysis.
(9316 views)

Functional Analysis
by Alexander C. R. Belton - Lancaster University
These lecture notes are an expanded version of a set written for a course given to final-year undergraduates at the University of Oxford. A thorough understanding of Banach and Hilbert spaces is a prerequisite for this material.
(10842 views)