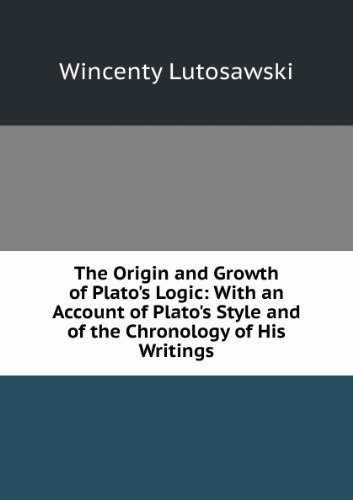 The Origin and Growth of Plato's Logic
by Wincenty Lutosawski

Description:
In undertaking the investigations summarized in this volume, the author's chief aim was to explain the origin of Logic by a psychological study of the first logician. This required a knowledge of the chronology of Plato's writings, not supplied by our historical tradition nor by the extant Platonic investigations.

Logic, Inductive and Deductive
by William Minto - ManyBooks
In this little treatise two things are attempted that at first might appear incompatible. One of them is to put the study of logical formulae on a historical basis. The other aim is to increase the power of Logic as a practical discipline.
(7344 views)

Symbolic Logic
by Lewis Carroll - Macmillan and co
Here you see Carroll the mathematician at his playful best. This isn't about modern symbolic logic but about ways of expressing classical logic with symbols. It's loaded with amusing problems to delight any mathematical puzzler.
(12859 views)

Elements of Deductive Logic
by Antony Eagle - University of Adelaide
This textbook covers the basics of formal logic and elementary metatheory. Its distinguishing feature is that it has more emphasis on metatheory than comparable introductory textbooks. It was originally written for an introductory logic course.
(2814 views)