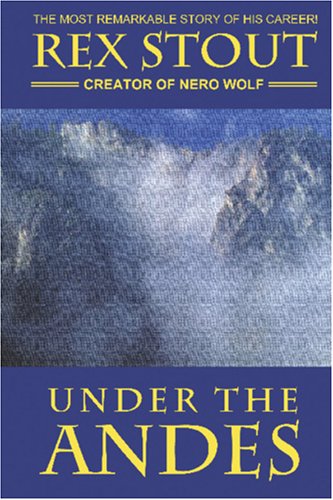 Under the Andes
by Rex Stout

Description:
This early novel by Rex Stout follows two men and a woman on a vacation in the Andes .. a vacation which takes them to a lost world beneath the mountains! This novel is a scientific romance of the pulp adventure variety.

The Secret Of The Australian Desert
by Ernest Favenc - Blackie
The unknown fate of Ludwig Leichhardt has always centred most of the romance of story about his memory. No clue to the disappearance of the whole party has ever been discovered. This mystery of Australian exploration is the groundwork of the story.
(11737 views)

Doctor Syn: A Smuggler Tale of the Romney Marsh
by Russell Thorndyke - Doubleday, Page & Company
Posing as a respectable vicar in Dymchurch in 18th century, Dr. Syn is actually the retired pirate Captain Clegg. Clegg, believed hanged in Rye, is no longer being sought by the authorities. However, country life proves too tame for Syn.
(9491 views)

Robbery Under Arms
by Rolf Boldrewood
A story of life and adventure in the bush and in the goldfields of Australia. The book deals with the classic idea of an honest man driven to crime and the suffering it brings him. It is also full of the adventure and excitement that comes along.
(5301 views)

Robin Hood
by Paul Creswick - ManyBooks
This is the classic story of the life and adventures of Robin Hood, who lived as an outlaw in Sherwood Forest dedicated to fighting tyranny. Robin Hood, champion of the poor and oppressed, stands against the cruel power of Prince John ...
(5648 views)