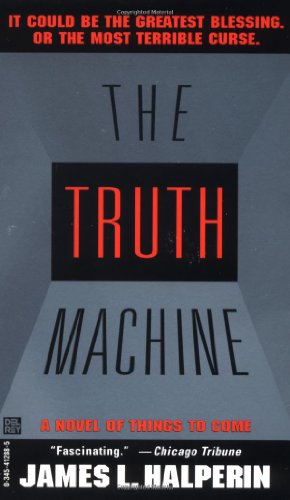 Description:
What would the world be like if scientists developed the perfect lie detector? How would it change our criminal justice system? Psychiatric practice? International diplomacy? In his first novel, Halperin argues that such an invention could lead humanity into an era of unequaled prosperity, one in which crime is virtually unknown and true democracy is possible.

In the Days of the Comet
by H. G. Wells - Macmillan Publishers
A provocative novel by H.G. Wells. In the midst of a world war, a comet brushes the atmosphere of earth, causing everyone to lose consciousness for a few hours. When the world awakens, everyone has an expanded understanding of the meaning of things.
(7829 views)

The Cosmic Computer
by H. Beam Piper - ManyBooks
Conn Maxwell returns from Terra to his poverty-stricken home planet of Poictesme, 'The Junkyard Planet', with news of the possible location of Merlin, a military super-computer rumored to have been abandoned there after the last war...
(4410 views)

The Sex Life of the Gods
by Michael Knerr - Uptown Publications
He left the mother ship and headed for Terra; he smiled at the instrument panel and watched the operation of the big scout ship as it rocketed toward the light ribbon of atmosphere that enveloped the planet. It was a joke, in a way ...
(6600 views)