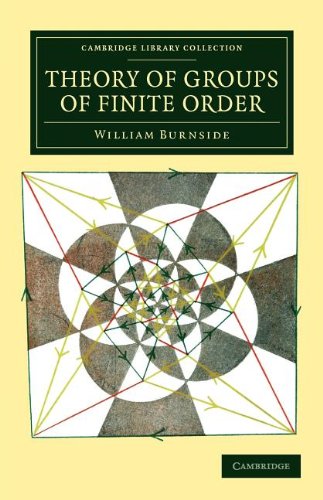 Theory of Groups of Finite Order
by William Burnside

Description:
After introducing permutation notation and defining group, the author discusses the simpler properties of group that are independent of their modes of representation; composition-series of groups; isomorphism of a group with itself; Abelian groups; groups whose orders are the powers of primes; Sylow's theorem; etc.

Theory and Applications of Finite Groups
by G. A. Miller, H. F. Blichfeldt, L. E. Dickson - J. Wiley
The book presents in a unified manner the more fundamental aspects of finite groups and their applications, and at the same time preserves the advantage which arises when each branch of an extensive subject is written by a specialist in that branch.
(6733 views)

Groups and Semigroups: Connections and Contrasts
by John Meakin - University of Nebraska-Lincoln
In the present paper, I will discuss some of these connections between group theory and semigroup theory, and I will also discuss some rather surprising contrasts between the theories. I will focus primarily on the theory of inverse semigroups.
(8082 views)

Group theory for Maths, Physics and Chemistry
by Arjeh Cohen, Rosane Ushirobira, Jan Draisma
Symmetry plays an important role in chemistry and physics. Group captures the symmetry in a very efficient manner. We focus on abstract group theory, deal with representations of groups, and deal with some applications in chemistry and physics.
(12650 views)