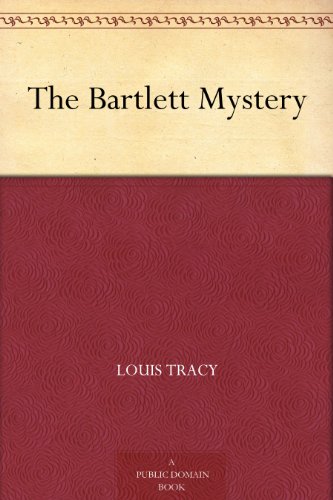 The Bartlett Mystery
by Louis Tracy

Description:
When Ronald Tower, one of New York's wealthy elite, is pulled into the river, it at first seems to be a simple case of robbery gone wrong. But as the case unfolds it proves to involve blackmail and political intrigue at the highest levels of the American government. With the fate of a U. S. senator and the young woman he loves in the balance, Rex Carshaw must unravel...

The Red Year: A Story of the Indian Mutiny
by Louis Tracy - Grosset & Dunlap
The lie and the message flew through India with the inconceivable speed with which such ill tidings always travels in that country. Ever north went the news that the British Raj was doomed. And so the flame spread, and was fanned to red fury ...
(4107 views)

A Mysterious Disappearance
by Louis Tracy - Project Gutenberg
Lady Dyke was a strong-minded woman. There was no trace of doubt in the wrinkled brows and reflective eyes. She held back the curtains with her left hand, buttoning a glove at the wrist with the other. Fog or no fog, she would venture forth...
(5020 views)

The Day of Wrath: A Story of 1914
by Louis Tracy - Edward J. Clode
I wish to assure the reader that every incident in this book casting discredit on the invaders of Belgium is founded on actual fact. I refer those who may doubt the truth of this statement to the official records published by the Government.
(3872 views)

The Late Tenant
by Louis Tracy - ManyBooks
London has a stony heart with wooden arteries, through which the stream of life rushes noisily. To ears tuned by the far-flung silence of the prairie this din of traffic was thunderous. A clear sky overhead and a sun sinking slowly ...
(3831 views)