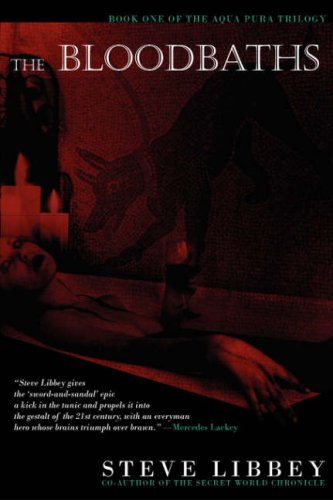 The Bloodbaths
by Steve Libbey

Description:
Crixus Oraan is a water artesan, an engineer who builds aqueducts and piping for bathhouses and mansions in the empire of Rond. His guild has entrusted him with a large sum of gold, but in a misguided effort to win enough to buy a lavish house for his new fiancé Kharrina, he loses the guild's gold in a card game.

RuneCraft
by Michael J. Losacco
RuneCraft is the first book in a trilogy of high fantasy novels that explores deep, metaphysical themes. The story revolves around Peter Uriel, who, after making his transition, is sent to another world to save them from utter ruination.
(8440 views)

Veiled Eyes
by C.L. Bevill - Smashwords
Anna always wondered who she was; an orphan or abandoned child. As she travels to New Orleans she quickly realizes that the dreams she's had of a strangely attractive man are very real and that he has a strong psychic connection to her.
(8430 views)

One; Betrayal
by Christopher Ames - maybeepic.com
With a worsening shortage of food and threats of war from a rival tribe, the survival of the Stone Axe clan must come before others. Faced with dirty tactics desperate measures have become commonplace, and drawing the line long forgotten.
(9044 views)

Butcher Bird
by Richard Kadrey - Night Shade Books
Spyder Lee is a happy man who owns a tattoo shop. One night a demon tries to bite his head off before he’s saved by a stranger. The demon infected Spyder so that he can suddenly see the world as it really is: full of angels, demons and monsters.
(14470 views)