Comic History of the United States
by Livingston Hopkins - G. W. Carleton & co , 1876
The author hired a vacant lot on Nassau street, and there, surrounded by the paraphernalia of literature and art, he went to work with pen and pencil to jot down the leading incidents of American history to the best of a somewhat defective memory.
(6341 views)

Good and Evil
by Michael Pearl, Danny Bulanadi - No Greater Joy Ministries , 2008
The Ultimate Superhero Graphic Novel. In the beginning... Before the first man was created, before the earth, the sun, the stars, even before light and time were created, there was God. He alone existed without beginning, but he was not alone...
(12241 views)

Bound By Law: Tales from the Public Domain
by J. Boyle, J. Jenkins, K. Aoki - Center for the Study of the Public Domain , 2006
This graphic novel is an excellent introduction to copyright law. The authors wanted to make copyright accessible for everyone. The 'plot' revolves around Akiko, a filmmaker who wants to capture a day in the life of New York City ...
(8891 views)

English Caricaturists
by Graham Everitt - Swan Sonnenschein & Co. , 1893
An entertaining history of caricature, and consequently of the events, political and social, of the nineteenth century. The book gives an elaborate estimate of the merits of the later caricaturists and a complete account of their lives.
(16628 views)

The art of caricaturing
by Mitchell Smith - F.J. Drake & co , 1941
In this brief and consistent book Mitchell Smith gives lessons that cover all branches of caricaturing. Drawings illustrate all necessary points, and each point is explained in the text. Author included caricatures of many famous men.
(20757 views)

Ostrich Cycles
by Carl Antonowicz , 2007
This is a comic book based on a dream. 'The world is very sick, grandpa says. He says they're all walking somewhere they think is important. He says they've got everything all mixed up. We're the only ones who can help them, grandpa says.
(17543 views) 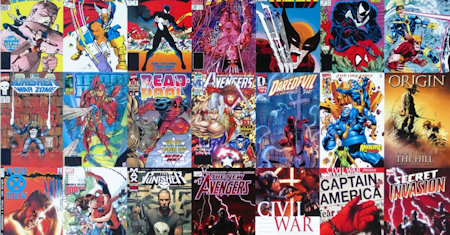