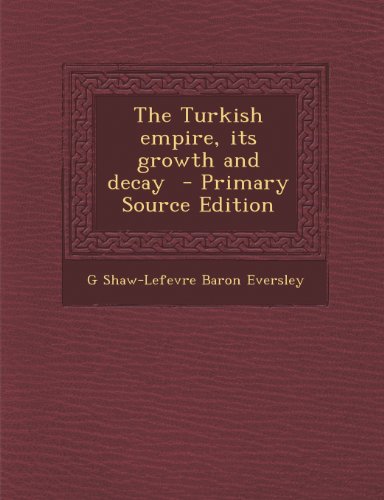 The Turkish Empire: Its Growth and Decay
by Lord Eversley

Description:
This volume tells, in a compact and popular form, the story of the growth and decay of the Turkish Empire. It does not aim at a full history of the long period dealt with. The author explains the process by which the Turkish Empire was aggregated by its first ten great Sultans, and has since been, in great part, dismembered under their twenty-five degenerate successors, and to assign causes for these two great historic movements.

Japanese History
- Wikibooks
Japan today is a modern democracy and economy comparable to the European and USA model of politics and economics. This has not always been the case and throughout most of its history Japan practiced an 'isolationist' policy.
(8467 views)

The Andaman Islands
by F. Dass - South Asia Books
Easy to read book on the subject of the Andaman islands and their strange aboriginal inhabitants. The author naively and cheerfully lists his facts and graphic descriptions, adds a few personal observations and then goes on to the next topic.
(14825 views)

Afghanistan: The Soviet Invasion and the Afghan Response, 1979-1982
by Mohammed Kakar - University of California Press
Every ninth Afghan had died, every seventh has been disabled, every third had fled abroad: this book reveals the true horror of this unfortunate conflict. The author is an Afghan historian who has studied Afghan society, culture, and politics.
(13234 views)

Struggle for Asia
by Francis Low - Books for Libraries Press
Intended to supply a background on Asian affairs for the average citizen, who has neither the time nor the inclination to pursue intensive research, but who reads the daily papers and is frequently puzzled by developments which occur in Asia.
(14661 views)