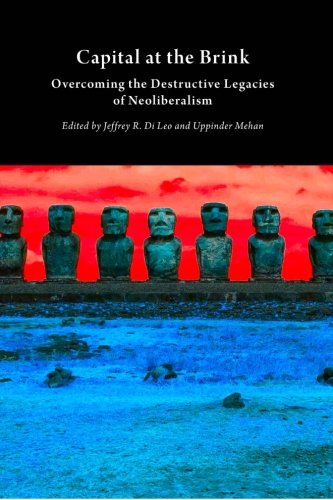 Description:
Capital at the Brink reveals the pervasiveness, destructiveness, and dominance of neoliberalism within American society and culture. The contributors to this collection also offer points of resistance to an ideology wherein, to borrow Henry Giroux's comment, 'everything either is for sale or is plundered for profit.'

The Decline of American Capitalism
by Lewis Corey - Covici, Friede
The depression which set in after 1929 was the worst economic disaster in American history. It was aggravated by the acute world crisis, a major catastrophe of capitalism. The revival, because of its speculative character, did not lead to recovery.
(10710 views)

Deep Freeze: Iceland's Economic Collapse
by Philipp Bagus, David Howden - Ludwig von Mises Institute
In this book, the two young Professors Bagus and Howden document the sad story of the Icelandic government's policy mistakes -- the artificial creation of a boom, and the savage bust that was the inevitable outcome of this boom.
(6817 views)

A Century of War
by John V. Denson - Ludwig Von Mises Institute
The book covers the history of America's large wars from 1860 through the Cold War, describing the 20th century as the bloodiest in all history. Denson recounts how the wars came about through a series of deceitful political ploys.
(17109 views)