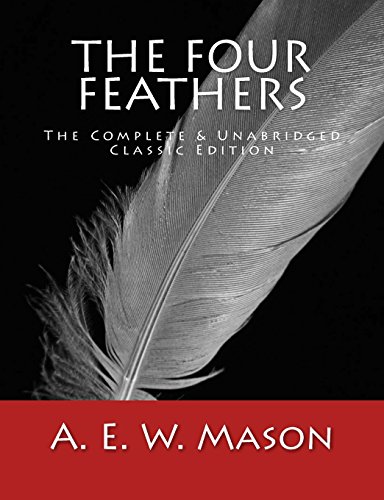 The Four Feathers
by A. E. W. Mason

Description:
Against the background of the Mahdist War, young Faversham disgraces himself by quitting the army, which friends perceive as cowardice, symbolised by the four white feathers they give him. He redeems himself, feather by feather, with acts of physical courage to save his friends. He also wins back the heart of the woman he loves.

The Affair at the Semiramis Hotel
by A. E. W. Mason - Charles Scribner's Sons
For the first time since she had entered the room Joan raised her head and looked at him. Her eyes were full of terror, and with the terror was mixed an incredulity as though she could not believe that that had happened which she knew had happened...
(4719 views)

The Four Corners of the World
by A. E. W. Mason - C. Scribner's sons
Fascinating collection of short stories, including the following: The Clock, Green Paint, North of the Tropic of Capricorn, One of Them, Raymond Byatt, The Crystal Trench, The House of Terror, The Brown Book, The Refuge, Peiffer, The Ebony Box, etc.
(2016 views)

At the Villa Rose
by A. E. W. Mason - Charles Scribner's Sons
In Aix les Bains during the early 20th century, Celia Harland, a beautiful young English girl down on her luck is befriended by a rich widow, Madame Dauvray, an addict of 'spiritualism', and stages seances for her benefactrix ...
(2479 views)

The Broken Road
by A. E. W. Mason - C. Scribner's sons
Set amid the Himalayan mountain passes, Broken Road brings to life a tale of adventure, daring rescue and the underlying menace of British political manoeuvres. Along the way, news from Mecca and a gift misunderstood cause mayhem from all concerned.
(2461 views)