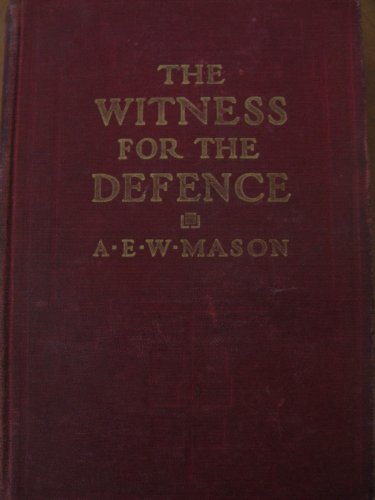 Witness for the Defence
by A. E. W. Mason

Description:
A British barrister takes the witness stand after becoming embroiled in a shocking murder in colonial India. 'The Witness for the Defence' is a 1913 melodramatic novel by A.E.W. Mason. It was adapted by Mason from a 1911 play he had written. In 1919 it was made into an American silent film.

The Four Feathers
by A. E. W. Mason - Macmillan
Against the background of the Mahdist War, young Faversham disgraces himself by quitting the army, which friends perceive as cowardice, symbolised by the four white feathers. He redeems himself with acts of physical courage to save his friends.
(3752 views)

At the Villa Rose
by A. E. W. Mason - Charles Scribner's Sons
In Aix les Bains during the early 20th century, Celia Harland, a beautiful young English girl down on her luck is befriended by a rich widow, Madame Dauvray, an addict of 'spiritualism', and stages seances for her benefactrix ...
(2358 views)

The Affair at the Semiramis Hotel
by A. E. W. Mason - Charles Scribner's Sons
For the first time since she had entered the room Joan raised her head and looked at him. Her eyes were full of terror, and with the terror was mixed an incredulity as though she could not believe that that had happened which she knew had happened...
(4599 views)