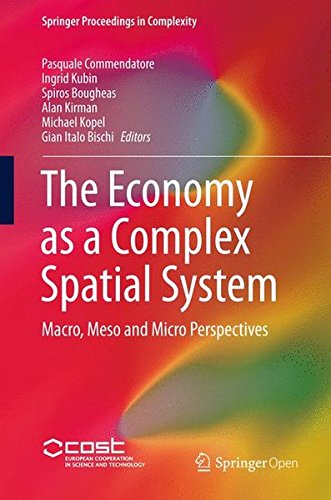 The Economy as a Complex Spatial System

Description:
Visualizing the EU as a complex and multi-layered network, this collected volume is organized in three parts, each of them dealing with a different level of analysis: the macro-level, the meso-level, and the micro-level ...

Mathematical Analysis for Economists
by R. G. D. Allen - Macmillan And Company
The mathematical methods described are used in the elucidation of problems of economic theory. Illustrative examples are added and it is hoped that the reader will become familiar with the mathematical tools and applications to concrete problems.
(5027 views)

Capital as Power: A Study of Order and Creorder
by Jonathan Nitzan, Shimshon Bichler - Routledge
The authors address the old theoretical conundrum in political economy -- the theory of capital -- with a view to supplying a more satisfactory answer to the question 'what is capital?' The work fits into the tradition of radical political economy.
(10602 views)

The Pure Theory of Capital
by Friedrich A. Hayek - Ludwig von Mises Institute
The greatest failing of non-Austrians theories of macroeconomics is that they lack a robust theory of capital. F.A. Hayek sought to fill out the theory of the business cycle with an impenetrable one, and the result was this remarkable 1941 treatise.
(13666 views)

Efficiency and Externalities in an Open-Ended Universe
by Roy Cordato - Ludwig von Mises Institute
This important book is a thorough and extensive study, in which Cordato shows that there is no standard by which we can judge efficiency apart from the market standard, and no way to adjudicate property rights apart from exchange relationships.
(10657 views)