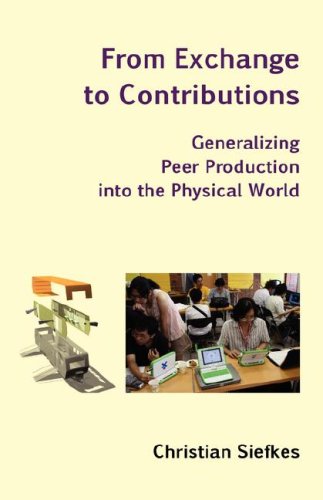 From Exchange to Contributions: Generalizing Peer Production into the Physical World
by Christian Siefkes

Description:
A new mode of production has emerged in the areas of software and content production. This mode, which is based on sharing and cooperation, has spawned whole mature operating systems such as GNU/Linux as well as innumerable other free software applications; giant knowledge bases such as the Wikipedia; a large free culture movement; and a new, wholly decentralized medium for spreading, analyzing and discussing news and knowledge, the so-called blogosphere.

Patterns of Software: Tales from the Software Community
by Richard P. Gabriel - Oxford University Press
An informative inside look at the world of software design and computer programming and the business that surrounds them. Written for computer scientists and software entrepreneurs, but the essays are accessible to everyone.
(19753 views)

Working through Screens
by Jacob Burghardt - Flashbulb Interaction
A reference for product teams creating new applications for thinking work. Written for use during early, formative conversations, it provides teams with a broad range of considerations for setting the overall direction for their onscreen tools.
(13791 views)

Bringing Design to Software
by Terry Winograd - Addison-Wesley
In this landmark book, Terry Winograd shows how to improve the practice of software design, by applying lessons from other areas of design to the creation of software. The goal is to create software that works -- really works.
(10065 views)