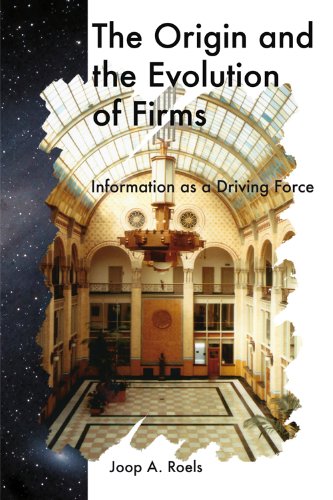 The Origin and the Evolution of Firms: Information as a Driving Force
by J. A. Roels

Description:
This book develops a consistent theory of evolution in its wider sense, examining the information based laws and forces that drive it. Exploring subjects as diverse as economics and the theories of thermodynamics, the author revisits the paradox of the apparent conflict between the laws of thermodynamics and evolution to arrive at a systems theory, tracing a continuous line of evolving information sets that connect the Big-Bang to the firms and markets of our current socio-economic system.

Capital and Production
by Richard von Strigl - Mises Institute
Strigl's important work is translated to English. The book links Eugen von Böhm-Bawerk's production theory and Mises's business cycle theory, and gives a pathbreaking account of the role of consumers' goods within the structure of production.
(13153 views)

Modeling Bounded Rationality
by Ariel Rubinstein - The MIT Press
The author considers the modeling of choice, the modeling of procedural rationality, knowledge, memory, the choice of what to know, and group decisions. The second part discusses the fundamental difficulties of modeling bounded rationality in games.
(11520 views)

Historical Economics: Art or Science?
by Charles P. Kindleberger - University of California Press
The essays cover a range of historical periods and also include European history and explorations of long-run changes in the American economy. Economists and historians will consult this powerful argument for the importance of historical economics.
(12834 views)

Discovering Artificial Economics
by David Batten - Westview Press
This is an informal and revealing introduction to the ideas of modern systems theory and self-organization as they apply to problems in the economic realm. David Batten interleaves anecdotes and stories with technical discussions.
(11807 views)