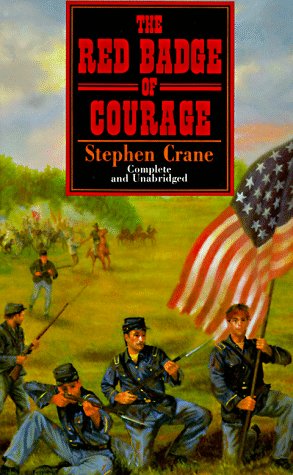 The Red Badge of Courage
by Stephen Crane

Description:
Stephen Crane’s The Red Badge of Courage was published as a complete work in 1895 and quickly became the benchmark for modern anti-war literature. Although the exact battle is never identified, Crane based this story of a soldier’s experiences during the American Civil War on the 1863 Battle of Chancellorsville. Many veterans, both Union and Confederate, praised the book’s accurate representation of war, and critics consider its stylistic strength the mark of a literary classic.

Active Service
by Stephen Crane - Frederick A. Stokes Co.
Rufus Coleman is now a respectable member of society. He is hoping to marry Majory Wainwright despite her father's reservations. As the war between Turkey and Greece erupts we find Majory unable to return from her trip to Greece ...
(1266 views)

The Third Violet
by Stephen Crane - D. Appleton
The novel delves deeply into the complexities of love, viewed through the lens of the unlikely romance that blossoms between an up-and-coming artist and an aristocratic socialite. Stephen Crane's fourth short novel, written when he was 24 years old.
(1330 views)

Wounds in the Rain
by Stephen Crane - Frederick A. Stokes Company
These tales are episodic, reports of isolated instances -- the humorous experiences of correspondents, the magnificent courage of signalmen under fire, the forgotten adventure of a converted yacht -- but all are instinct with the red fever of war.
(4248 views)

Whilomville Stories
by Stephen Crane - Harper & Brothers
This collection consists of thirteen stories: The Angel Child; Lynx-Hunting; The Lover and the Telltale; Showin' Off; Making an Orator; Shame; The Carriage-Lamps; The Knife; The Stove; The Trial, Execution, and Burial of Homer Phelps; The Fight; etc.
(1397 views)