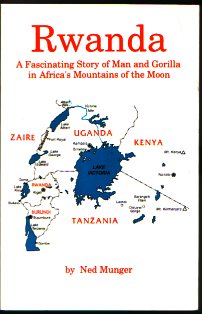 Rwanda: A Fascinating Story of Man and Gorilla
by Edwin S. Munger

Description:
The theme of this novella is the narrowing of the distance between humans and our close cousins that has taken place since the 1920s. This is a story about a remarkable man in the Mountains of the Moon in Rwanda. The author is a world-recognized authority on Africa.

The Human Race
by Louis Figuier - D. Appleton & co.
The different races which originate in one species, the primitive type having been modified by the operation of climate, food, intermixture and local customs, differ to a marvellous extent, in their outward appearance, colour and physiognomy ...
(7063 views)

Human Animals
by Frank Hamel - Frederick A. Stokes
From the abundant records and traditions dealing with the curious belief that certain men and women can transform themselves into animals I have collected a number of instances and examples which throw fresh light on the subject.
(7918 views)

The Story of the British Race
by John Munro - D. Appleton and Company
The book brings the important views of modern anthropologists before the general public in familiar language. It will tend to destroy some errors regarding the origin and pedigree of the nation which have infected life and literature for ages.
(11016 views)

Prehistoric Men
by Robert J. Braidwood - Chicago Natural History Museum
The men who lived in prehistoric times left us no history books, but they did unintentionally leave a record of their presence and their way of life. This record is studied and interpreted by different kinds of scientists ...
(5372 views)