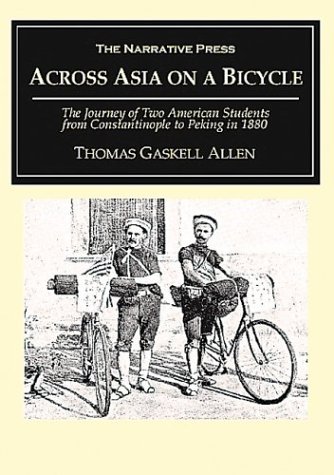 Across Asia on a Bicycle
by Thomas Gaskell Allen, William Lewis Sachtleben

Description:
Two Washington University graduates sail to Liverpool and begin a 15,000-mile bicycle journey to Peking. The account begins in Asia Minor as the students cycle on through Persia and Turkestan, with detours to Merv, Bokhara, and Samarkand. They peddle across the vast tract of the Gobi Desert to Peking, where they were received by Li-Hung-Chang, the Prime Minister of China. "A practical finish to a theoretical education" in liberal arts.

Travel to Beijing
by Stig Albeck - BookBoon
Plan your visit of the capital of China, the 'central kingdom', with this free travel guide. Did you always want to walk in the footsteps of the great Chinese emperors? Then a visit to the Forbidden City is mandatory on your schedule.
(7554 views)

A Time Travelers Guide to Istanbul
by Luther Hughes - Smashwords
A man takes his two daughters to one of the world's great cities. Along the way they meet some fascinating characters, and explore the complex relationship between imaginary time, existentialism, Islam, Christianity, and the East and West.
(3012 views)

Intimate China
by Archibald Little - Hutchinson & Co.
The Chinese Empire is rather larger than Europe. Being on the eastern side of a great continent, it has the same extremes of climate as are to be found in the United States. Fruits, flowers, and crops vary in like manner ...
(5012 views)

Altai-Himalaya: A Travel Diary
by Nicholas Roerich - Nicholas Roerich Museum
Nicholas Roerich kept a diary of his travels by yak and camel through a remote region still largely unknown today. He chronicles his expedition through Sinkiang, Altai-Mongolia and Tibet from 1924 to 1928 in twelve exciting chapters.
(4959 views)