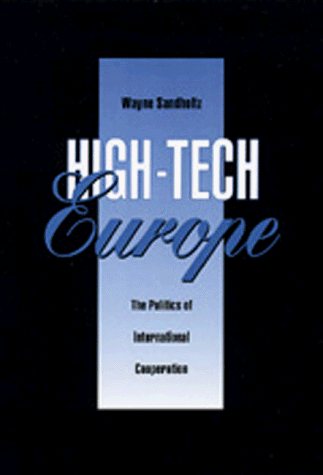 High-Tech Europe: The Politics of International Cooperation
by Wayne Sandholtz

Description:
A study of cooperative efforts in the high-tech industries of Europe. Sandholtz examines why collaboration came late to these countries, how protective walls came down, how countries work together in economically sensitive areas. Governments have recognized for decades the dynamic role played by microelectronics, computers, and telecommunications in the modern economy. Although Europe's deficiencies in these crucial sectors had long been acknowledged, it was not until the 1980s that European nations began collaborating to develop and promote high-tech industries.

The Dropping of the Atomic Bomb: Truman's True Intentions
by Dominick Abel Severance - Christendom College
Truman’s true intention was to use the destruction of a Japanese city to shock the world and manipulate the horror and destructive power of the bomb to create fear in the international community to ensure the security of American political interests.
(16123 views)

Capitalism: A Treatise on Economics
by George Reisman - Jameson Books
Reisman's ringing manifesto for laissez-faire capitalism free of all government intervention is at once a conservative polemic and a monumental treatise, brimming with original theories, remarkable for its depth, scope and rigorous argument.
(15643 views)

21st Century American Government and Politics
by David Paletz, Diana Owen, Timothy Cook
The text is a comprehensive introduction to the vital subject of American government and politics. It introduces the intricacies of the Constitution, the complexities of federalism, the meanings of civil liberties and the conflicts over civil rights.
(5206 views)

UK Constitution and Government
- Wikibooks
The perfect introduction for high school lessons on UK government. It is also a quick guide for people of other nations to get some insight into the arcane governance of the UK with its powerless head of state and all powerful House of Commons.
(14311 views)