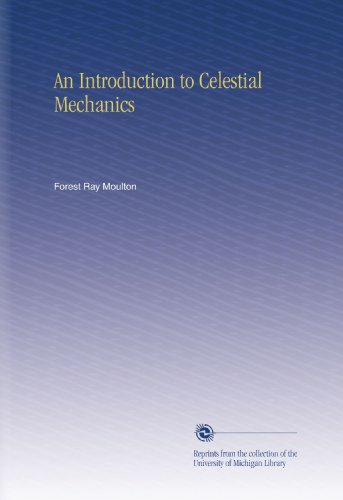 An Introduction to Celestial Mechanics
by Forest Ray Moulton

Description:
This is an excellent textbook covering not only celestial mechanics, but a wide range of astrophysics topics. The coverage and detail this book deals with is by no means introductory, and is written for the college level student in mathematics.

Celestial Mechanics: Notes and Work
by J.D. Mireles James - Rutgers University
These are notes about some elementary topics in celestial mechanics. They focus primarily on numerical methods for studying n-body problems, but they include enough background material so that they are readable outside the context of that course.
(12641 views)

An introductory treatise on the lunar theory
by Ernest W Brown - Cambridge University Press
Problem of three bodies, forces on the Moon relative to the Earth, and those on the Sun relative to the centre of mass of the Earth and Moon, force-function and disturbing function usually used, distinction between the lunar and the planetary theories.
(11971 views)

Planetary Theory
by Ernest Brown, Clarence Shook - Cambridge University Press
The purpose of this volume is the development of methods for the calculation of the general orbit of a planet. We attempted to anticipate the difficulties which arise, by setting forth the various devices which may be utilized when needed.
(11654 views)

An Introduction to Celestial Mechanics
by Richard Fitzpatrick - The University of Texas at Austin
This book will bridge the gap between standard undergraduate treatments of celestial mechanics, which rarely advance beyond two-body orbit theory, and full-blown graduate treatments. A knowledge of elementary Newtonian mechanics is assumed.
(8995 views)