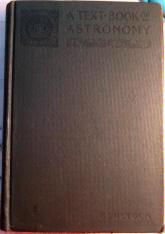 A Text-book of Astronomy
by George C. Comstock

Description:
The present work is not a compendium of astronomy or an outline course of popular reading in that science. It has been prepared as a text-book, and the author has endeavored to concentrate attention upon those parts of the subject that possess special educational value. From this point of view matter which permits of experimental treatment with simple apparatus is of peculiar value and is given a prominence in the text beyond its just due in a well-balanced exposition of the elements of astronomy.

An Introduction to Astronomy
by Forest Ray Moulton - The MacMillan Company
It has been assumed that the reader has an interest in the wonderful universe which surrounds him, and that he has arrived at such a stage of intellectual development that he demands the reasons for whatever conclusions he is asked to accept.
(11295 views)

The Elements of Theoretical and Descriptive Astronomy
by Charles J. White - J. Wiley
I present the main principles of Astronomy in a form adapted to the elementary course of instruction which is commonly given at colleges and the higher grades of academies. I selected those topics which seemed to me to be the most important.
(6202 views)