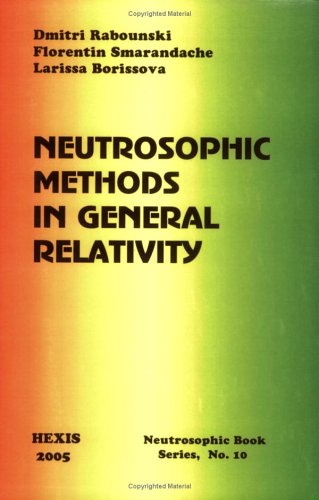 Description:
Neutrosophy is a theory developed by Florentin Smarandache in 1995 as a generalization of dialectics, which studies the origin, nature and properties of neutralities. This book applies neutrosophic method to the General Theory of Relativity, aiming to discover new effects hidden before. Studying Einstein's basic space-time, neutrosophic method displays new trajectories and particles never considered before.

The Mathematical Theory of Relativity
by Arthur Stanley Eddington - Cambridge University Press
Sir Arthur Eddington here formulates mathematically his conception of the world of physics derived from the theory of relativity. The argument is developed in a form which throws light on the origin and significance of the great laws of physics.
(2173 views)

Semi-Riemann Geometry and General Relativity
by Shlomo Sternberg
Course notes for an introduction to Riemannian geometry and its principal physical application, Einstein’s theory of general relativity. The background assumed is a good grounding in linear algebra and in advanced calculus.
(14452 views)

General Covariance and the Foundations of General Relativity
by John D Norton - University of Pittsburgh
This text reviews the development of Einstein's thought on general covariance (the fundamental physical principle of GTR), its relation to the foundations of general relativity and the evolution of the continuing debate over his viewpoint.
(6839 views)