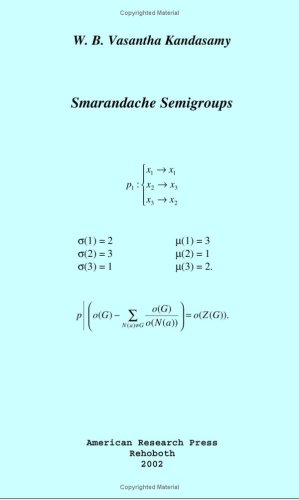 Description:
This book is a piece of work on Smarandache semigroups and assumes the reader to have a good background on group theory; we give some recollection about groups and some of its properties just for quick reference. Since most of the properties and theorems given regarding the Smarandache semigroups are new and cannot be found in existing literature the author has taken utmost efforts to see that the concepts are completely understood by illustrating with examples and a great number of problems.

Introduction to Groups, Invariants and Particles
by Frank W. K. Firk - Orange Grove Texts Plus
This is an introduction to group theory, with an emphasis on Lie groups and their application to the study of symmetries of the fundamental constituents of matter. The text was written for seniors and advanced juniors, majoring in the physical sciences.
(18325 views)

Symmetry Groups and Their Applications
by Willard Miller - Academic Press
A beginning graduate level book on applied group theory. Only those aspects of group theory are treated which are useful in the physical sciences, but the mathematical apparatus underlying the applications is presented with a high degree of rigor.
(14442 views)

Theory and Applications of Finite Groups
by G. A. Miller, H. F. Blichfeldt, L. E. Dickson - J. Wiley
The book presents in a unified manner the more fundamental aspects of finite groups and their applications, and at the same time preserves the advantage which arises when each branch of an extensive subject is written by a specialist in that branch.
(7096 views)