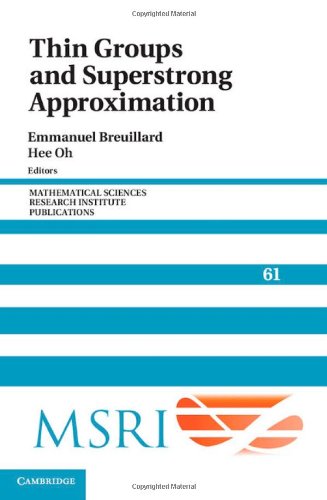 Description:
This is a collection of surveys and primarily expository articles focusing on recent developments concerning various quantitative aspects of 'thin groups'. This book provides a broad panorama of a very active field of mathematics at the boundary between geometry, dynamical systems, number theory, and combinatorics.

An Introduction to Group Theory: Applications to Mathematical Music Theory
by Flor Aceff-Sanchez, et al. - BookBoon
In this text, a modern presentation of the fundamental notions of Group Theory is chosen, where the language of commutative diagrams and universal properties, so necessary in Modern Mathematics, in Physics and Computer Science, is introduced.
(9463 views)

Algebraic Groups, Lie Groups, and their Arithmetic Subgroups
by J. S. Milne
This work is a modern exposition of the theory of algebraic group schemes, Lie groups, and their arithmetic subgroups. Algebraic groups are groups defined by polynomials. Those in this book can all be realized as groups of matrices.
(11178 views)

Galois Groups and Fundamental Groups
by Leila Schneps - Cambridge University Press
This book contains eight articles which focus on presenting recently developed new aspects of the theory of Galois groups and fundamental groups, avoiding classical aspects which have already been developed at length in the standard literature.
(12296 views)

Elements of Group Theory
by F. J. Yndurain - arXiv
The following notes are the basis for a graduate course. They are oriented towards the application of group theory to particle physics, although some of it can be used for general quantum mechanics. They have no pretense of mathematical rigor.
(15016 views)