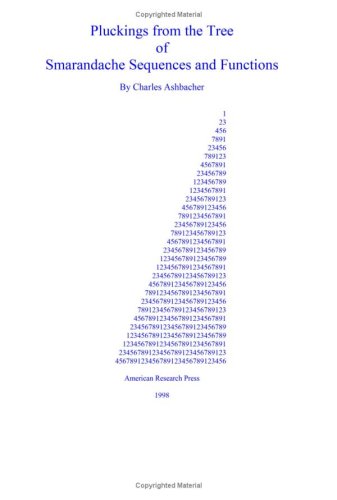 Pluckings from the tree of Smarandache: Sequences and functions
by Charles Ashbacher

Description:
This is the third book in a series of works exploring the set of problems called Smarandache Notions. In this case, however, there is a concerted effort to delve more deeply into the fundamental mathematics of the problems and resolve the issues. The level of difficulty here will be somewhat higher than that of the previous books.

Introduction to Shimura Varieties
by J.S. Milne
This is an introduction to the theory of Shimura varieties, or, in other words, to the arithmetic theory of automorphic functions and holomorphic automorphic forms. Because of their brevity, many proofs have been omitted or only sketched.
(8462 views)

Collections of Problems on Smarandache Notions
by Charles Ashbacher - Erhus University Press
This text deals with some advanced consequences of the Smarandache function. The reading of this book is a form of mindjoining, where the author tries to create the opportunity for a shared experience of an adventure.
(16206 views)

Harmonic Analysis, the Trace Formula, and Shimura Varieties
by J. Arthur, D. Ellwood, R. Kottwitz - American Mathematical Society
The goal of this volume is to provide an entry point into the challenging field of the modern theory of automorphic forms. It is directed on the one hand at graduate students and professional mathematicians who would like to work in the area.
(11433 views)

Lectures on Shimura Varieties
by A. Genestier, B.C. Ngo
The goal of these lectures is to explain the representability of moduli space abelian varieties with polarization, endomorphism and level structure, due to Mumford and the description of the set of its points over a finite field, due to Kottwitz.
(8852 views)