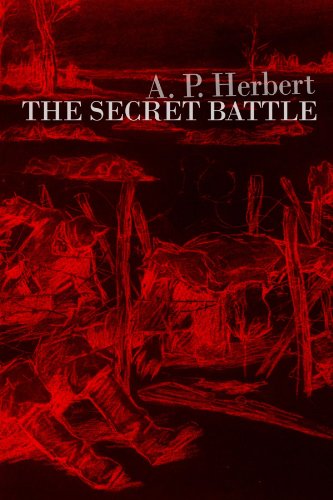 The Secret Battle
by A. P. Herbert

Description:
A novel which draws upon Herbert's experiences as a junior infantry officer in the First World War, and has been praised for its accurate and truthful portrayal of the mental effects of the war on the participants. It was one of the earliest novels to contain a detailed description of Gallipoli, and to challenge the Army's executions of soldiers for desertion.

The Forgotten Prophecy
by Blaire Stull - Bibliotastic.com
For years there has been hatred between the monarchy and the rebels and war has devastated the lives of many. A prophecy was once made predicting the end of the war. Aiden and Aithne come from very different worlds and now those worlds have collided.
(5605 views)

Direct Action: An Historical Novel
by Luke Hauser - GroundWork
More than 7000 people were arrested in nonviolent protests in California in 1980s, developing the art of direct action to a peak not reached again until Seattle in 1999, and in many ways never surpassed. Direct action is more than getting arrested.
(6206 views)

Lords of the World
by Alfred John Church - Blackie & Son ltd.
The year 146 B.C. was an annus mirabilis in the development of Roman dominion. I have attempted in this story to group some picturesque incidents round the person of a young Greek who struggles in vain to resist the destiny of the conquering race.
(4390 views)

Ben-Hur: A Tale Of The Christ
by Lew Wallace - Project Gutenberg
A popular 19th century American novel. This tale combines the events of the life of Jesus with grand historical spectacle in the exciting story of Judah of the House of Hur, a man who finds extraordinary redemption for himself and his family.
(11067 views)