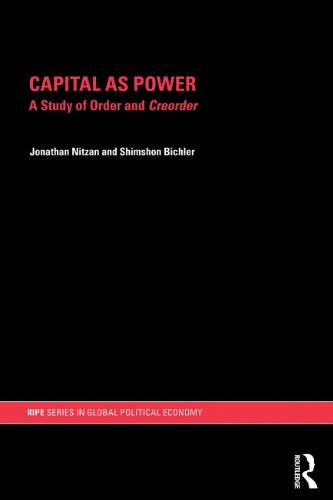 Capital as Power: A Study of Order and Creorder
by Jonathan Nitzan, Shimshon Bichler

Description:
According to the authors, capital is not a narrow economic entity, but a symbolic quantification of power. It has little to do with utility or abstract labour, and it extends far beyond machines and production lines. Capital, the authors claim, represents the organized power of dominant capital groups to reshape – or creorder – their society.

Efficiency and Externalities in an Open-Ended Universe
by Roy Cordato - Ludwig von Mises Institute
This important book is a thorough and extensive study, in which Cordato shows that there is no standard by which we can judge efficiency apart from the market standard, and no way to adjudicate property rights apart from exchange relationships.
(10679 views)

Income, Employment and the Price Level
by Jacob Marschak - A. M. Kelley
In his lecture, Professor Marschak has set himself the task of incorporating the new developments in monetary theory and presenting them in a logical, precise and rigorous manner. He reveals the precise nature of the new analytical equipment.
(8268 views)

The Anti-Capitalistic Mentality
by Ludwig Von Mises - Libertarian Press
The author searches for the roots of the common anti-capitalist bias. What makes so many people unhappy in the private property order? In such a system, the failures need a scapegoat. People whose ambitions have not been satisfied blame the system.
(15732 views)

Mathematical Analysis for Economists
by R. G. D. Allen - Macmillan And Company
The mathematical methods described are used in the elucidation of problems of economic theory. Illustrative examples are added and it is hoped that the reader will become familiar with the mathematical tools and applications to concrete problems.
(5059 views)