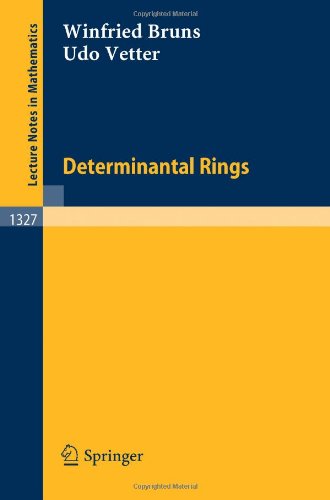 Description:
Determinantal rings and varieties have been a central topic of commutative algebra and algebraic geometry. Their study has attracted many prominent researchers and has motivated the creation of theories which may now be considered part of general commutative ring theory. The book gives a first coherent treatment of the structure of determinantal rings. The main approach is via the theory of algebras with straightening law.

Analysis on Homogeneous Spaces
by Ralph Howard - Royal Institute of Technology Stockholm
The main goal of these notes is to give a proof of the basic facts of harmonic analysis on compact symmetric spaces and then to apply these to concrete problems involving things such as the Radon and related transforms on these spaces.
(7697 views)

Lectures on Torus Embeddings and Applications
by Tadao Oda - Tata Institute of Fundamental Research
Theory of torus embeddings has find many applications. The point of the theory lies in its ability of translating meaningful algebra-geometric phenomena into very simple statements about the combinatorics of cones in affine space over the reals.
(8792 views)

Algebraic Curves: an Introduction to Algebraic Geometry
by William Fulton - Benjamin
These notes develop the theory of algebraic curves from the viewpoint of modern algebraic geometry, but without excessive prerequisites. It assumed that the reader is familiar with some basic properties of rings, ideals, and polynomials.
(14156 views)