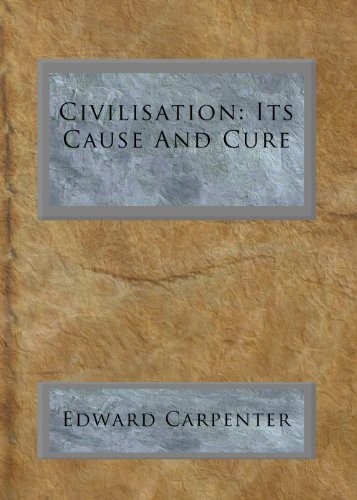 Civilisation: Its Cause and Cure
by Edward Carpenter

Description:
As a philosopher Carpenter is particularly known for his publication of Civilisation, Its Cause and Cure in which he proposes that civilisation is a form of disease that human societies pass through. Civilisations, he says, rarely last more than a thousand years before collapsing, and no society has ever passed through civilisation successfully. His 'cure' is a closer association with the land and greater development of our inner nature.

Stanford Encyclopedia of Philosophy
by Edward N. Zalta (ed.) - Stanford University
Encyclopedia was designed so that each entry is kept up to date by an expert or group of experts in the field. All entries and substantive updates are refereed by the members of a distinguished Editorial Board before they are made public.
(7385 views)

The Complete Plato
by Plato - Feedbooks
Plato was a Greek philosopher and mathematician of the Classic Age who founded the Academy of Athens. He has distinguished himself as one of the founders of Western philosophy by recording the teachings of his master and his own philosophies.
(9902 views)

Abuses
by Alphonso Lingis - University of California Press
Philosophical work and a travel documentary from Third World countries. It explores the fundamental principles of Continental philosophy, describing the cultures he visits, and the horrific conditions that people in these cultures must endure.
(11573 views)

Modelling Rationality... and Beyond the Physics
by Gh. C. Dinulescu-Campina - American Research Press
The author is convinced that the Platonic theory of reminiscence is not a mere speculation, and the meaning of the spirit of science is the expression of a natural phenomenon which in the sense of the MESER concept is called revelation.
(12898 views)