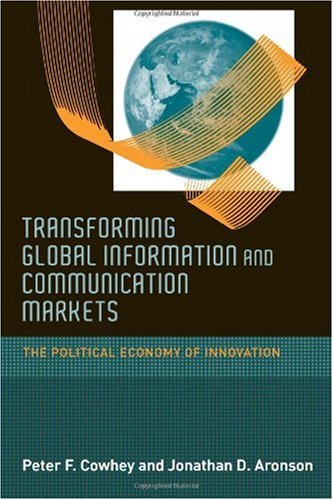 Description:
This pathbreaking examination of information and communication technology from a political economy perspective argues that continued rapid innovation and economic growth require new approaches in global governance that will reconcile diverse interests and enable competition to flourish. The authors discuss this crucial turning point in both theoretical and practical terms, analyzing changes in ICT markets, examining three case studies, and considering principles and norms for future global policies.

The Betrayal of the American Right
by Murray N. Rothbard - Ludwig von Mises Institute
This book will change the way you look at American politics. It shows that the corruption of American 'conservatism' began long before George W. Bush ballooned the budget and asserted dictatorial rights over the country and the world.
(13508 views)

The Decline of the American Republic
by John T. Flynn - Mises Institute
In 1955, John T. Flynn saw what few others journalist did: the welfare-warfare state conspired to bring down American liberty. The New Deal combined with World War Two had fastened leviathan control over a country born in liberty.
(13750 views)

The Morality of Capitalism: What Your Professors Won't Tell You
by Tom Palmer - Smashwords
This book is about the moral justification of what philosopher Robert Nozick called 'capitalist acts among consenting adults'. It's about the system of cooperative production and free exchange characterized by the predominance of such acts.
(4890 views)

Case for Legalizing Capitalism
by Kel Kelly - Ludwig von Mises Institute
What's the American system of economics? Most people would say it is capitalism, which thereby deserves all fault when anything goes wrong. Kel Kelly responds to this myth in this comprehensive treatment of the free market and intervention.
(7592 views)