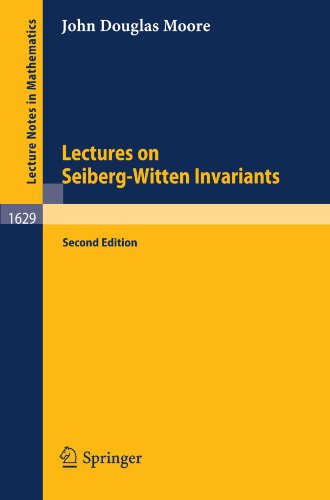 Description:
This book gives a streamlined introduction to the theory of Seiberg-Witten invariants suitable for second-year graduate students. These invariants can be used to prove that there are many compact topological four-manifolds which have more than one smooth structure, and that others have no smooth structure at all. This topic provides an excellent example of how global analysis techniques, which have been developed to study nonlinear partial differential equations, can be applied to the solution of interesting geometrical problems.

Special Course in Functional Analysis: (Non-)Commutative Topology
by Ville Turunen - Aalto TKK
In this book you will learn something about functional analytic framework of topology. And you will get an access to more advanced literature on non-commutative geometry, a quite recent topic in mathematics and mathematical physics.
(8799 views)

Topology and Physics: A Historical Essay
by C. Nash - arXiv
In this essay we wish to embark on the telling of a story which, almost certainly, stands only at its beginning. We shall discuss the links and the interaction between one very old subject, physics, and a much newer one, topology.
(11011 views)

Manifolds and Differential Forms
by Reyer Sjamaar - Cornell University
The text covers manifolds and differential forms for an audience of undergraduates who have taken a typical calculus sequence, including basic linear algebra and multivariable calculus up to the integral theorems of Green, Gauss and Stokes.
(9898 views)