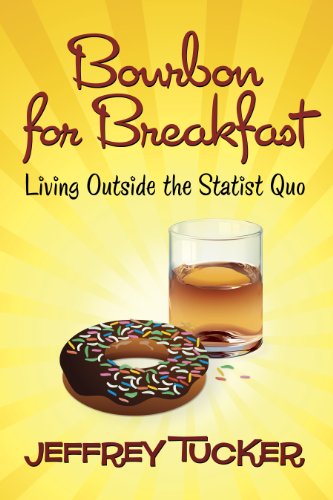 Bourbon for Breakfast: Living Outside the Statist Quo
by Jeffrey A. Tucker

Description:
The state makes a mess of everything it touches, argues Jeffrey Tucker in Bourbon for Breakfast. Perhaps the biggest mess it makes is in our minds. Its pervasive interventions in every sector affect the functioning of society in so many ways, we are likely to intellectually adapt rather than fight. Tucker proposes another path: see how the state has distorted daily life, rethink how things would work without the state, and fight against the intervention in every way that is permitted.

Capitalism 3.0: A Guide to Reclaiming the Commons
by Peter Barnes - Berrett-Koehler Publishers
Barnes' idea is that we need to use a 3rd institution to develop a better form a capitalism that takes into account natural resources that are used and not accounted for. This is needed, because government has failed to do a good job in this regard.
(15041 views)

Charade of the Debt Crisis
by Steven Kim - MintKit Press
In complex fields such as finance and economics, a common blunder involves a mix-up between the destination and the journey. The confusion is showcased by the hoopla during the financial crisis of 2008 in tandem with the debt crisis in Europe...
(6536 views)

Getting Back to Full Employment: A Better Bargain for Working People
by Jared Bernstein, Dean Baker - Center for Economic & Policy Research
Real wage growth for workers in the bottom half of the income scale is dependent on the overall rate of unemployment. The authors present policies to get the unemployment rate down to a level where far more workers have a chance of getting ahead.
(7783 views)