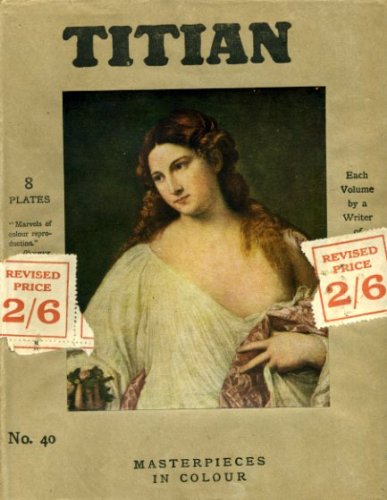 Description:
Titian was one of the most versatile of Italian painters, equally adept with portraits, landscape backgrounds, and mythological and religious subjects. His painting methods, particularly in the application and use of color, would exercise a profound influence not only on painters of the Italian Renaissance, but on future generations of Western art.

Tone Relations in Painting
by Arthur Upham Pope - Harvard university press
This pamphlet has been written primarily for the needs of the students in the courses in drawing and painting in Harvard University and Radcliffe College; but as an elementary statement of the theory of tone relations, it may be of use to others.
(5287 views)

Great Masters in Painting: Rembrandt van Rijn
by Malcolm Bell - George Bell & Sons
Rembrandt van Rijn was a Dutch painter and etcher. He is generally considered one of the greatest painters and printmakers in European art history. His contributions to art came in a period that historians call the Dutch Golden Age.
(9704 views)

Van Gogh and Expressionism
by Maurice Tuchman - Solomon R. Guggenheim Foundation
An attempt to illustrate Vincent Van Gogh's influence on subsequent art movements. In lieu of discussing which artists exerted an influence on Van Gogh, Tuchman discusses how Van Gogh was a model for the modern Expressionists of the 21st century.
(6822 views)

Line and Form
by Walter Crane - G. Bell & Sons, Ltd.
The substance of the following chapters on Line and Form originally formed a series of lectures delivered to the students of the Manchester Municipal School of Art. There is no pretension to an exhaustive treatment of a subject.
(12355 views)