Natural Language Processing Succinctly
by Joseph D. Booth - Syncfusion, Inc. , 2018
Author will guide readers through designing a simple system that can interpret and provide reasonable responses to written English text. With this foundation, readers will be prepared to tackle the greater challenges of natural language development.
(4342 views)

Speech and Language Processing
by Dan Jurafsky, James H. Martin - Stanford University , 2017
This text takes an empirical approach to the subject, based on applying statistical and machine-learning algorithms to large corporations. The authors describe a unified vision of speech and language processing. Emphasis is on practical applications.
(5760 views)

How Mobile Robots Can Self-organise a Vocabulary
by Paul Vogt - Language Science Press , 2015
This book presents a series of experiments in which two robots try to solve the symbol grounding problem. The experiments are based on the language game paradigm, and involve real mobile robots that are able to develop a grounded lexicon ...
(5035 views)

Probabilistic Models in the Study of Language
by Roger Levy - University of California, San Diego , 2012
A book on the topic of using probabilistic models in scientific work on language ranging from experimental data analysis to corpus work to cognitive modeling. The intended audience is graduate students in linguistics, psychology and computer science.
(5767 views)

Natural Language Processing for Prolog Programmers
by Michael A. Covington - Prentice-Hall , 1994
Designed to bridge the gap for those who know Prolog but have no background in linguistics, this book concentrates on turning theories into practical techniques. Coverage includes template and keyword systems, definite clause grammars, and more.
(9538 views)

Natural Language Processing with Python
by Steven Bird, Ewan Klein, Edward Loper - O'Reilly Media , 2009
This book offers a highly accessible introduction to natural language processing, the field that supports a variety of language technologies. With it, you'll learn how to write Python programs that work with large collections of unstructured text.
(15243 views)

Natural Language Processing for the Working Programmer
by Daniël de Kok, Harm Brouwer , 2011
We will go into many of the techniques that so-called computational linguists use to analyze the structure of human language, and transform it into a form that computers work with. We chose Haskell as the main programming language for this book.
(14978 views)

Notes on Computational Linguistics
by Edward Stabler - UCLA , 2003
What kind of computational device could use a system like a human language? This text explores the computational properties of devices that could compute morphological and syntactic analyses, and recognize semantic relations among sentences.
(14788 views)

A Maximum Entropy Approach to Natural Language Processing
by A. L. Berger, S. A. Della Pietra, V. J. Della Pietra - Association for Computational Linguistics , 1996
The authors describe a method for statistical modeling based on maximum entropy. They present a maximum-likelihood approach for automatically constructing maximum entropy models and describe how to implement this approach efficiently.
(8880 views)

Computational Linguistics
by Igor Boshakov, Alexander Gelbukh , 2004
The book focuses on the basic set of ideas and facts from the fundamental science necessary for the creation of intelligent language processing tools, without going deeply into the details of specific algorithms or toy systems.
(21011 views)

Prolog and Natural-Language Analysis
by F. C. N. Pereira, S. M. Shieber - Center for the Study of Language , 2002
A concise introduction to logic programming and the logic-programming language Prolog both as vehicles for understanding elementary computational linguistics and as tools for implementing the basic components of natural-language-processing systems.
(19384 views) 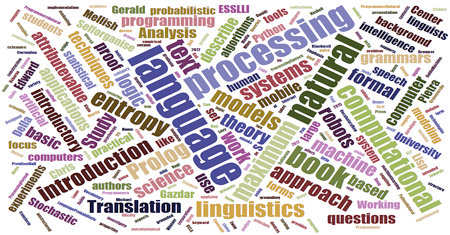