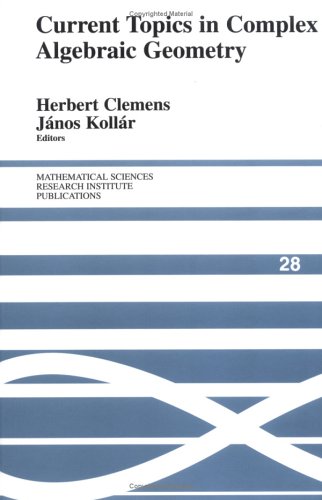 Description:
The 1992/93 academic year at the Mathematical Sciences Research Institute was devoted to Complex Algebraic Geometry. This volume collects survey articles that arose from this event, which took place at a time when algebraic geometry was undergoing a major change. To put it succinctly, algebraic geometry has opened up to ideas and connections from other fields that have traditionally been far away.

Multiplication of Vectors and Structure of 3D Euclidean Space
by Miroslav Josipovic - viXra
This text is a motivational survey of geometric algebra in 3D. The intention here was to use simple examples and reader is referred to the independent problem solving. The active reading of text is recommended, with paper and pencil in hand.
(5552 views)

Ample Subvarieties of Algebraic Varieties
by Robin Hartshorne - Springer
These notes are an enlarged version of a three-month course of lectures. Their style is informal. I hope they will serve as an introduction to some current research topics, for students who have had a one year course in modern algebraic geometry.
(6834 views)

Lectures on Deformations of Singularities
by Michael Artin - Tata Institute of Fundamental Research
These notes are based on a series of lectures given in 1973. The lectures are centered about the work of M. Scahlessinger and R. Elkik on infinitesimal deformations. Contents: Formal Theory and Computations; Elkik's Theorems on Algebraization.
(7995 views)