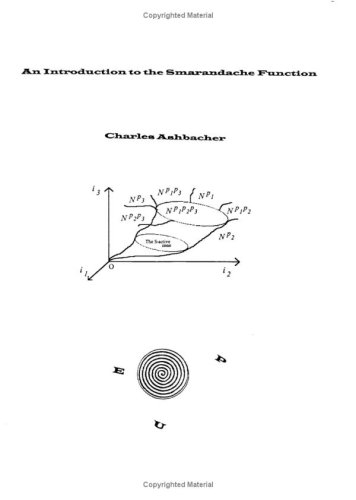 An Introduction to the Smarandache Function
by Charles Ashbacher

Description:
As one of the oldest mathematical disciplines, the roots of number theory extend back into antiquity. Problems are often easy to state, but extremely difficult to solve, which is the origin of their charm. All mathematicians have a soft spot in their hearts for the "purity" of the integers. In the 1970's a Rumanian mathematician Florentin Smarandache created a new function in number theory. The consequences of its simple definition encompass many areas of mathematics. The purpose of this text is to examine some of those consequences, giving the reader a taste for this unexplored territory.

Introduction to Shimura Varieties
by J.S. Milne
This is an introduction to the theory of Shimura varieties, or, in other words, to the arithmetic theory of automorphic functions and holomorphic automorphic forms. Because of their brevity, many proofs have been omitted or only sketched.
(8463 views)

Elliptic Curves over Function Fields
by Douglas Ulmer - arXiv
The focus is on elliptic curves over function fields over finite fields. We explain the main classical results on the Birch and Swinnerton-Dyer conjecture in this context and its connection to the Tate conjecture about divisors on surfaces.
(10587 views)

Lectures On Irregularities Of Distribution
by Wolfgang M. Schmidt - Tata Institute of Fundamental Research
The theory of Irregularities of Distribution began as a branch of Uniform Distributions, but is of independent interest. In these lectures the author restricted himself to distribution problems with a geometric interpretation.
(8121 views)