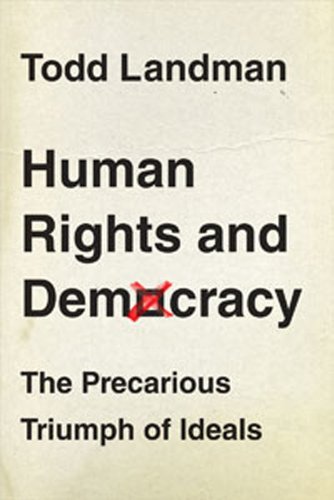 Human Rights and Democracy: The Precarious Triumph of Ideals
by Todd Landman

Description:
The author combines an overview of the key theoretical models of democracy and human rights with a state-of-the-art survey which reports on trade-offs between achievements, set-backs and challenges in some of the world's 'hotspots'.

Discrimination at Work: Comparing European, French, and American Law
by Marie Mercat-Bruns - University of California Press
Powerful and incisive, the book examines issues such as racial and religious bias, sexual harassment, gender discrimination, and equality for LGBT individuals, highlighting comparisons that will further discussions on human rights across borders.
(2627 views)

Can Human Rights Survive?
by Conor Gearty - Cambridge University Press
In this set of three essays, originally presented in 2005, Conor Gearty considers whether human rights can survive the challenges of the war on terror, the revival of political religion, and the steady erosion of the world's natural resources.
(4004 views)

In Modern Bondage: Sex Trafficking in the Americas
- DePaul University College of Law
This second revised edition includes the expanded findings of trafficking of women and children for purposes of commercial sexual exploitation in the Americas. Included are the regional overview of Belize, Costa Rica, the Dominican Republic, etc.
(9204 views)