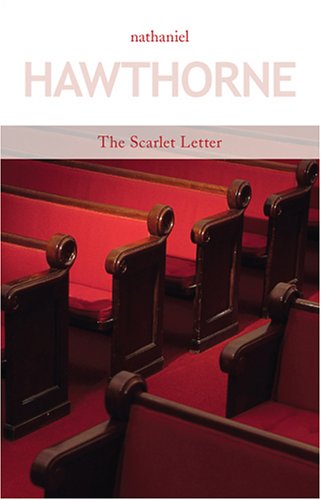 The Scarlet Letter
by Nathaniel Hawthorne

Description:
It is 1642 in the Puritan town of Boston. Hester Prynne has been found guilty of adultery and has born an illegitimate child. In lieu of being put to death, she is condemned to wear the scarlet letter A on her dress as a reminder of her shameful act. Hester's husband had been lost at sea years earlier and was presumed dead, but now reappears in time to witness Hester's humiliation on the town scaffold. Upon discovering her deed, the vengeful husband becomes obsessed with finding the identity of the man who dishonored his wife. To do so he assumes a false name, pretends to be a physician and forces Hester keep his new identity secret. Meanwhile Hester's lover, the beloved Reverend Dimmesdale, publicly pressures her to name the child's father, while secretly praying that she will not. Hester defiantly protects his identity and reputation, even while faced with losing her daughter, Pearl.

The House of the Seven Gables
by Nathaniel Hawthorne - E.P. Dutton
Romance set in mid-19th-century Salem, Mass., the work is a somber study in hereditary sin based on the legend of a curse pronounced on Hawthorne's own family by a woman condemned to death during the infamous Salem witchcraft trials.
(11705 views)

The Marble Faun
by Nathaniel Hawthorne - Grosset & Dunlap
Murder and romance, innocence and experience dominate this sinister novel set in 19th-century Rome. Three young artists and their friend, an Italian count, find their lives irrevocably linked when one of them commits a violent crime of passion.
(6963 views)

Twice-Told Tales
by Nathaniel Hawthorne - David McKay
Collection of previously published short stories by Nathaniel Hawthorne, issued in 1837 and revised and expanded in 1842. The stories reflect Hawthorne's moral insight and his lifelong interest in the history of Puritan New England.
(5472 views)

Septimius Felton
by Nathaniel Hawthorne - Houghton, Mifflin and Company
One of Nathaniel Hawthorne's later works, a thought-provoking tale of murder most foul. One of a series of the author's works that grapple with themes of immortality, written shortly before Hawthorne himself succumbed to a mysterious illness.
(5063 views)