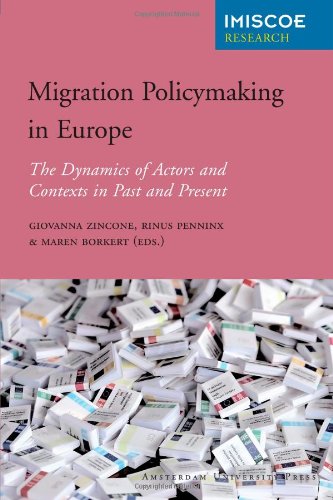 Description:
This important work analyses immigration and immigrant inclusion policies in ten European countries, examining how such policies are formed and subsequently implemented. The study singles out the important role of usually overlooked factors and actors that significantly affect policymaking alongside the formal legal framework. It also identifies similarities and diversities in European immigration policies.

Barack Obama's Post-American Foreign Policy
by Robert Singh - Bloomsbury Academic
Singh argues that Obama's approach of 'strategic engagement' was appropriate for a new era of constrained internationalism, but it has yielded modest results. Obama's search for the pragmatic middle has cost him political support at home and abroad.
(4922 views)

Delusions of Grandeur: The United Nations and Global Intervention
by Ted Galen Carpenter (ed.) - Cato Institute
The authors assess the UN's performance on a range of issues, offering both hope for the organization's potential as a modest diplomatic forum and a cautionary tale to those who contemplate entrusting the organization with an overly ambitious agenda.
(4968 views)

Haunted Housing
by Cassandra Chrones Moore - Cato Institute
Moore outlines the government-created mis-perceptions of risk affecting buyers and sellers of homes, tenants and landlords, brokers and agents. She argues that we need to apply risk/benefit analysis to the exaggerated claims being made today.
(4211 views)

Debating the Divine: Religion in 21st Century American Democracy
by Sally Steenland - Center for American Progress
This book turns down the heat and turns up the light on the question of whether religion should be a force shaping our public policies and our common civic life. We have chosen to examine the many facets of the issue in a thoughtful way.
(12106 views)