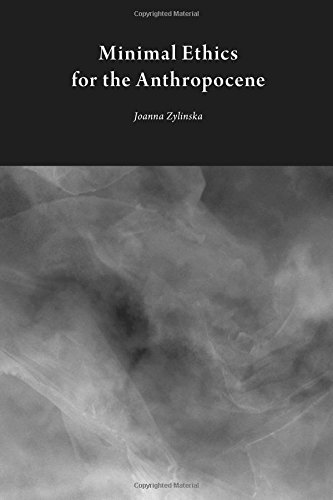 Minimal Ethics for the Anthropocene
by Joanna Zylinska

Description:
Even though the book is first and foremost concerned with life -- understood as both a biological and social phenomenon -- it is the narrative about the impending death of the human population (i.e., about the extinction of the human species), that provides a context for its argument. Anthropocene names a geo-historical period in which humans are said to have become the biggest threat to life on earth. However, rather than as a scientific descriptor, the term serves here primarily as an ethical injunction to think critically about human and nonhuman agency in the universe.

The Ethics
by Benedict de Spinoza - D. Van Nostrand
Spinoza uses the methods of Euclid to describe a single entity, properly called both 'God' and 'Nature'. From this follow the identity of mind and body, the necessary causation of events and actions, and the illusory nature of free will.
(10344 views)

Philosophy for the Masses: Ethics
by David Bruce - Smashwords
This book consists of a number of philosophical arguments that I find interesting and that I think that some other people may find interesting. May you be struck by philosophical lightning. My series of books mainly consist of notes in essay form...
(6481 views)

The Foundations of Morality
by Henry Hazlitt - Von Mises Institute
A philosophical work, in which the author grounds a policy of private property and free markets in an ethic of classical utilitarianism. Hazlitt writes on the relationship between economics and the good of society in general.
(12591 views)

Animals and Ethics 101
by Nathan Nobis - Open Philosophy Press
The book presupposes no conclusions on the controversial moral questions about the treatment of animals, and argues for none either. Its goal is to help the reader better engage the issues and arguments on all sides with greater clarity.
(3916 views)