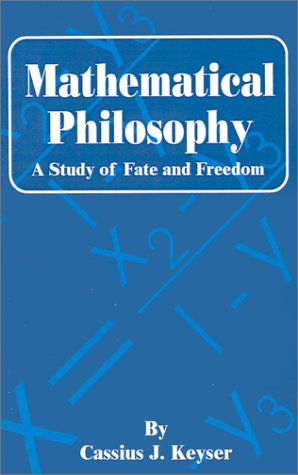 Mathematical Philosophy: A Study of Fate and Freedom
by Cassius Jackson Keyser

Description:
Though the course is designed primarily for students whose major interest is in Philosophy, I venture to hope that the lectures may not be ungrateful to a much wider circle of readers and scholars who desire to acquire a fair understanding of such genuinely great mathematical ideas as are accessible to all educated laymen and to come thus into touch with the universal spirit of the science which Plato called divine.

Aesthetics for the Working Mathematician
by Jonathan M. Borwein - DocServer
Most research mathematicians neither think deeply about nor are terribly concerned about either pedagogy or the philosophy of mathematics. Nonetheless, as I hope to indicate, aesthetic notions have always permeated (pure and applied) mathematics.
(11335 views)

Introduction to Mathematical Philosophy
by Bertrand Russell - University of Massachusetts Amherst
A very accessible mathematical classic. It sets forth in elementary form the logical definition of number, the analysis of the notion of order, the modern doctrine of the infinite, and the theory of descriptions and classes as symbolic fictions.
(13207 views)

A Philosophical Essay on Probabilities
by Pierre Simon Laplace - Chapman & Hall
Classic book on probability theory. It demonstrates, without the use of higher mathematics, the application of probability to games of chance, physics, reliability of witnesses, astronomy, insurance, democratic government, and many other areas.
(16481 views)

The Philosophy of Mathematics
by Auguste Comte - Harper & brothers
The book presents a map of the wide region of mathematical science -- a bird's-eye view of its features, and of the true bearings and relations of all its parts. Auguste Comte was the first philosopher of science in the modern sense of the term.
(11754 views)