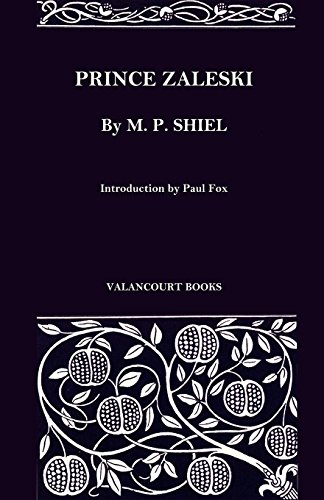 Description:
Prince Zaleski, an exiled Russian nobleman, inhabits a half-ruined abbey in Wales, where he spends most of his time smoking cannabis and opium. His retirement from the world is occasionally interrupted by his friend Shiel, who comes to seek Zaleski's help in solving mysteries that have baffled the greatest minds in Britain.

The Last Miracle
by M. P. Shiel - T. Werner Laurie
I have been asked by the publishers who bring out this book to add yet a mite to the mass of writing which has appeared in regard to the late events, for how are the mighty fallen! and, as when an oak announces its downfall through the forest ...
(2837 views)

The Purple Cloud
by M. P. Shiel
A 'last man' novel by the British writer Shiel. The story, a recording of a medium's meditation over the future writing of the text, details the narrator's (Adam Jeffson's) expedition to the North Pole during the 20th century on board the Boreal.
(6278 views)

Shapes in the Fire
by M. P. Shiel - John Lane Co.
This book represents a collection of short stories by M. P. Shiel, written in an opulent prose reminiscent of Poe. From the table of contents: Xelucha; Maria in the Rose-bush; Vaila; Premier and Maker; Tulsah; The Serpent-ship; Phorfor.
(2512 views)

The Lord of the Sea
by M. P. Shiel
The story is of Richard Hogarth, a man of lofty spirit who on discovering a cache of giant diamonds inside a fallen meteor undertakes a bold project to re-shape the human condition on a global scale. A very remarkable novel.
(3097 views)