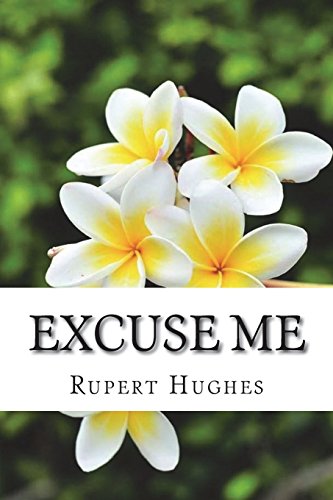 Excuse Me!
by Rupert Hughes

Description:
The young woman in the taxicab scuttling frantically down the dark street, clung to the arm of the young man alongside, as if she were terrified at the lawbreaking, neck-risking speed. But evidently some greater fear goaded her ...

Music Lovers Encyclopedia
by Rupert Hughes - McClure, Phillips & Co
A facsimile edition of a classic, long the standard reference on music with almost 1,000 pages that include an A to Z biographical dictionary of musicians with over 8,500 entries, a dictionary of 7,000 musical terms, synopses of 90 operas, and more.
(10380 views)

Souls for Sale
by Rupert Hughes - Harper and brothers
Mem Steddon marries Owen Scudder after a whirlwind courtship. However, on their wedding night, she has a change of heart. When the train taking them to Los Angeles stops for water, she impulsively and secretly gets off in the middle of the desert.
(1527 views)

In a Little Town
by Rupert Hughes - Harper & Brothers
Hughes was a prolific writer of short stories, with varying numbers well over one hundred credited to him. In a Little Town (1917) allowed Hughes to draw on his small-town roots with fourteen short stories about fictionalized people around Keokuk.
(1426 views)

What Will People Say?
by Rupert Hughes - Harper & Brothers
Waiting to be assigned to a new post, Army captain Harvey Forbes decides to treat himself to a holiday in New York City. Within a day, he has become mesmerized by beautiful Persis Cabot and determines to win her despite their many differences.
(1358 views)