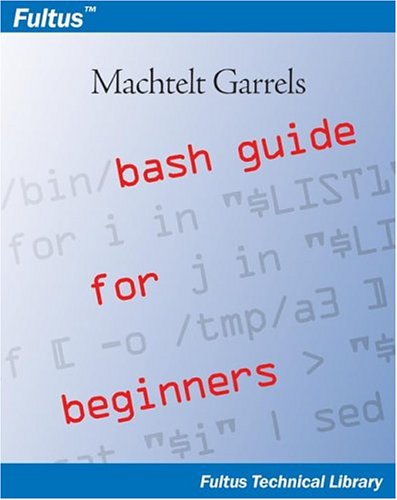 Description:
This guide discusses concepts useful in the daily life of the serious Bash user. While a basic knowledge of shell usage is required, it starts with a discussion of shell building blocks and common practices. Then it presents the grep, awk and sed tools that will later be used to create more interesting examples. The second half of the course is about shell constructs such as loops, conditional tests, functions and traps, and a number of ways to make interactive scripts. All chapters come with examples and exercises that will help you become familiar with the theory.

Guide to Unix
- Wikibooks
This book is a guide to Unix and Unix-like operating systems, such as GNU/Linux and *BSD. The book targets Unix or non-Unix users seeking background, Unix system users, and Unix system administrators (background and administrator instructions).
(8169 views)

Porting UNIX Software
by Greg Lehey - O'Reilly
The book deals with the whole life cycle of porting, from setting up a source tree on your system to correcting platform differences. It discusses the differences between versions of UNIX and the areas where porters tend to have problems.
(9078 views)

Effective AWK Programming
by Arnold D. Robbins
This tutorial covers the entire spectrum of awk script development: From the basics of opening, searching, and transforming text files, to a comprehensive tutorial for regular expressions, to more advanced features like internetworking.
(10890 views)

The Craft of Text Editing
by Craig A. Finseth - Lulu.com
This book covers all aspects of creating a character-based text editor. In the process, it discusses many aspects of creating a large application program including user interface, speed/memory/I/O tradeoffs, and many other considerations.
(7129 views)