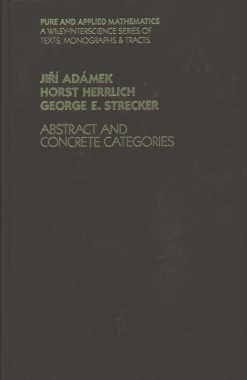 Description:
A modern introduction to the theory of structures via the language of category theory. Unique to this book is the emphasis on concrete categories. Also noteworthy is the systematic treatment of factorization structures, which gives a new, unifying perspective to earlier work and summarizes recent developments. Each categorical notion is accompanied by many examples, usually moving from special cases to more general cases. Comprises seven chapters; the first five present the basic theory, while the last two contain more recent research results in the realm of concrete categories, cartesian closed categories and quasitopoi. The prerequisite is an elementary knowledge of set theory. Contains exercises.

Banach Modules and Functors on Categories of Banach Spaces
by J. Cigler, V. Losert, P.W. Michor - Marcel Dekker Inc
This book is the final outgrowth of a sequence of seminars about functors on categories of Banach spaces (held 1971 - 1975) and several doctoral dissertations. It has been written for readers with a general background in functional analysis.
(8421 views)

Category Theory for Scientists
by David I. Spivak - arXiv
We attempt to show that category theory can be applied throughout the sciences as a framework for modeling phenomena and communicating results. In order to target the scientific audience, this book is example-based rather than proof-based.
(7858 views)